Funded by the Kunst am Bau/ Art and Architecture Award

After winning a Kunst am Bau/ Art and Architecture Award from the City of Bern, Switzerland in 2017, to design and install a sonic work for a to be rebuilt primary school in the borough of Kleefeld, and finally to use this infrastructure with the children at the school,  David Mollin and Salomé Voegelin (Mollin+Voegelin), lecturers in Sound Arts at the London College of Communication, have, after a delay caused by the pandemic, finally started the realisation of the work.

In 2017 Mollin+Voegelin were awarded a CHF 175,000 (GBP 160,000) from the Kunstkommission Bern, to realise a public art project in Bern, Switzerland. The project Kleefeld – Klangfeld , works through infrastructure building (from 2017 – 2022) and participatory interventions (from 2022 – 2027), to make the environment of a newly rebuilt local school in a culturally diverse area of the town into an ‘instrument’ to be listened to and sounded as a Klangfeld, as a sonic field, that makes audible the temporary and passing nature and use of the site: how it is inhabited by the local community in its diversity. It enables the pupils, teachers, administrators, local residents and visitors to engage with its sounds and add their own voices, sounds and rhythms to the built environment.

With the infrastructure in place, the project enables five artists to work with the children and the school over the next five years. Bringing a sonic sensibility and practice to the everyday experience of learning and teaching, and producing collaborative sound art works that will be performed on site and exhibited elsewhere and in further incarnations curated by Mollin+Voegelin.

"Art is seen as a part of the superstructure: the architectural, technological and ideological construction of a place, which becomes a part of the material basis of the artwork. It presents a way of realising art’s transformative powers, and enables the inhabitants to explore and change their environment and the social interactions and relationships that are conducted within it."
(From an interview with Mollin+Voegelin)

Jan Schacher, is the first artist to work with the infrastructure and the community of the school. He is an artist-researcher, instrumentalist, and composer who, among other things, studies how a musician’s body functions as a resonator and focal site for sound and presence, currently professor of music technology at the Sibelius Academy in Helsinki. He started his interventions in October 2022, and will be working on site at various times throughout the year.

Other artist who will work with the school over the next five years are:

You can follow the progress of the project on @Kleefeld_Klangfeld 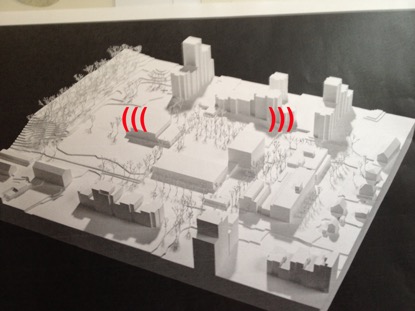